This is it, the end of our intrepid crew… just kidding! Trapped in a cage of worlds new and old, our heroes must devise a cunning escape plan that will require everything that they know about the world of Chrono Trigger… probably! At the very least they might need to call in help from some unexpected friends…

In our world, T and G attempt to unveil the storied past of the trio of misfits Ozzie, Flea, and Slash… if they had one?! In particular:

Editing, scripting, and podcast visual design by Nick Terwoord. Special thanks to Square Enix for making that game that we love, Chrono Trigger ...and for not suing us.

Special Announcement: The Race Against Time

The Race Against Time is a twenty-four hour marathon to do two things: raise money for charity, and beat all the endings of the greatest game ever made: Chrono Trigger.

On August 14 and 15, 2021, we’re raising money for Trans Lifeline—a grassroots hotline and microgrants 501(c)(3) non-profit organization offering direct emotional and financial support to trans people in crisis. Join the Nickscast family and friends as we embark on a magical journey to save the world of Chrono Trigger and our own all while giving away fabulous prizes.

Background: What we know… maybe

A Brief Interlude: Localization (in particular, in the 90s)

Speculation: What we don’t know

What is the Zeal Archives?

The Zeal Archives is a monthly podcast exploring the A-Z of the world of Chrono Trigger one bit at a time—two parts audio drama, one part discussion podcast, one hundred percent love letter to one of the best JRPGs of all time!

The Zeal Archives is published at zealarchives.com and thenickscast.com and can be found on most podcatching services. Please leave us comments, questions, criticism, or any other feedback at TheNickscast on Facebook or Twitter. 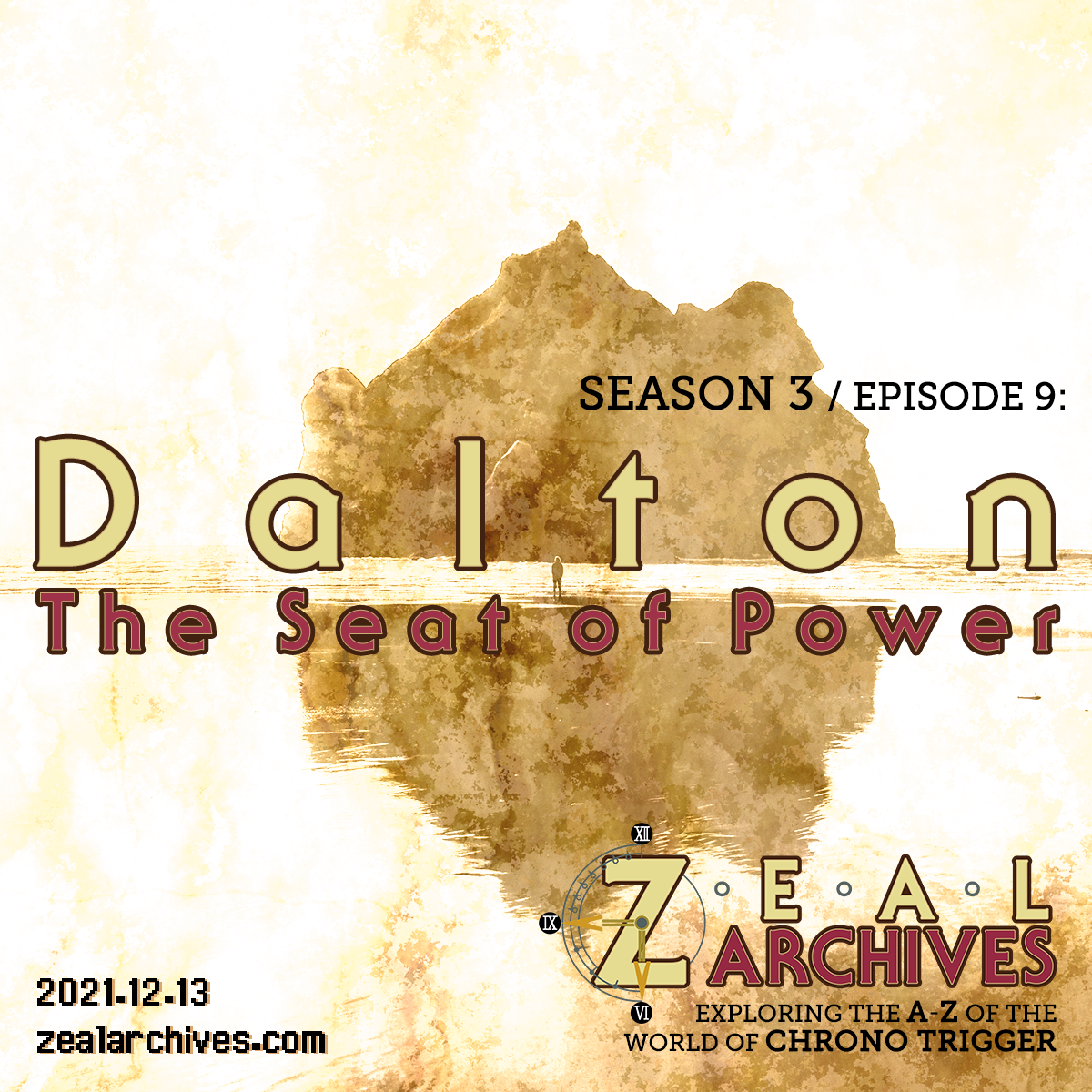 After restoring most of the Chrono Trigger timeline, our intrepid heroes unfortunately stumble into the path of … Dalton? And Azala?? Thrown into a prison cell on the Blackbird with neither tools nor weapons, how will the party escape and stop whatever nefarious scheme is afoot? Will T and G ever get to go home? There’s only one way out of this sticky situation: a stealth mission. In our world, T and G dig into the enigma that is the “seat” of power himself (in that he’s a big ass), Dalton! What is the deal with Dalton? How is it that a man with such distaste for authority have managed to rise so high in society, especially with such an eclectic fashion sense? Villains in Chrono Trigger! All are time-locked, and arguably there’s no main big bad (Lavos doesn’t count, really) Again, Chrono Trigger as a game of great moments and set pieces, and how it tried to do different things (like the Blackbird) to different effects Editing, scripting, and podcast visual design by Nick Terwoord. Special thanks to Square Enix for making that game that we love, Chrono Trigger ...and for not suing us. Episode Cast Alphabetically, by actor: Artimage in the role of Announcing Soldier Dan Murray in the role of King Dalton Manda Whitney in the role of Empress Azala Nick H in the ... Their fate is revealed: Gravely disappointed, T and G have _not_ made it home, but instead have opened a portal to the year 2300 AD. Will the Zeal Archives be enough, at this point, to get them closer to their final destination? Will they _ever_ escape the world of Chrono Trigger? And could this machination whirring to life in the dark spell fortune… or doom?! T and G discuss: * Heckran Cave! What is the point of it, and what should you know if you find yourself wandering through it? Perhaps there is some deeper lore involving Magus or even… Lavos?! * The big cheese of the cave, Heckran! How do you beat him, and why was he tasked with defending such an mundane location? * Storytelling in games. Namely, breadcrumbing the story as compared to railroading the players (hint: Chrono Trigger does a little bit of both)! ## Where to find us The Zeal Archives is a [Nickscast](https://thenickscast.com) production and can be found wherever fine podcasts are listened to, or at the source at [zealarchives.com](https://zealarchives.com) For news and other updates about the podcast, you can follow us on [Twitter](https://twitter.com/zealarchives) or [Facebook](https://facebook.com/zealarchives) @zealarchives For more about the hosts, Nick T and Nick G, check out [the Nickscast](https://thenickscast.com) on [Twitter](https://twitter.com/thenickscast), [Facebook](https://facebook.com/thenickscast), [Instagram](https://instagram.com/thenickscast), or [YouTube](https://youtube.com/thenickscast), all @thenickscast. ## Special Announcement: Livestream for the Cure 4 The 4th Annual Livestream for the Cure (or the Livestream 4 the Cure?) has been scheduled for FORTY-EIGHT HOURS from May 28th thru the 31st, with a small four hour kick-off event scheduled for the evening before to do final tests (and hopefully wrangle in some amazing guests). This year we’ll be pushing to raise $10,000 for the Cancer ... 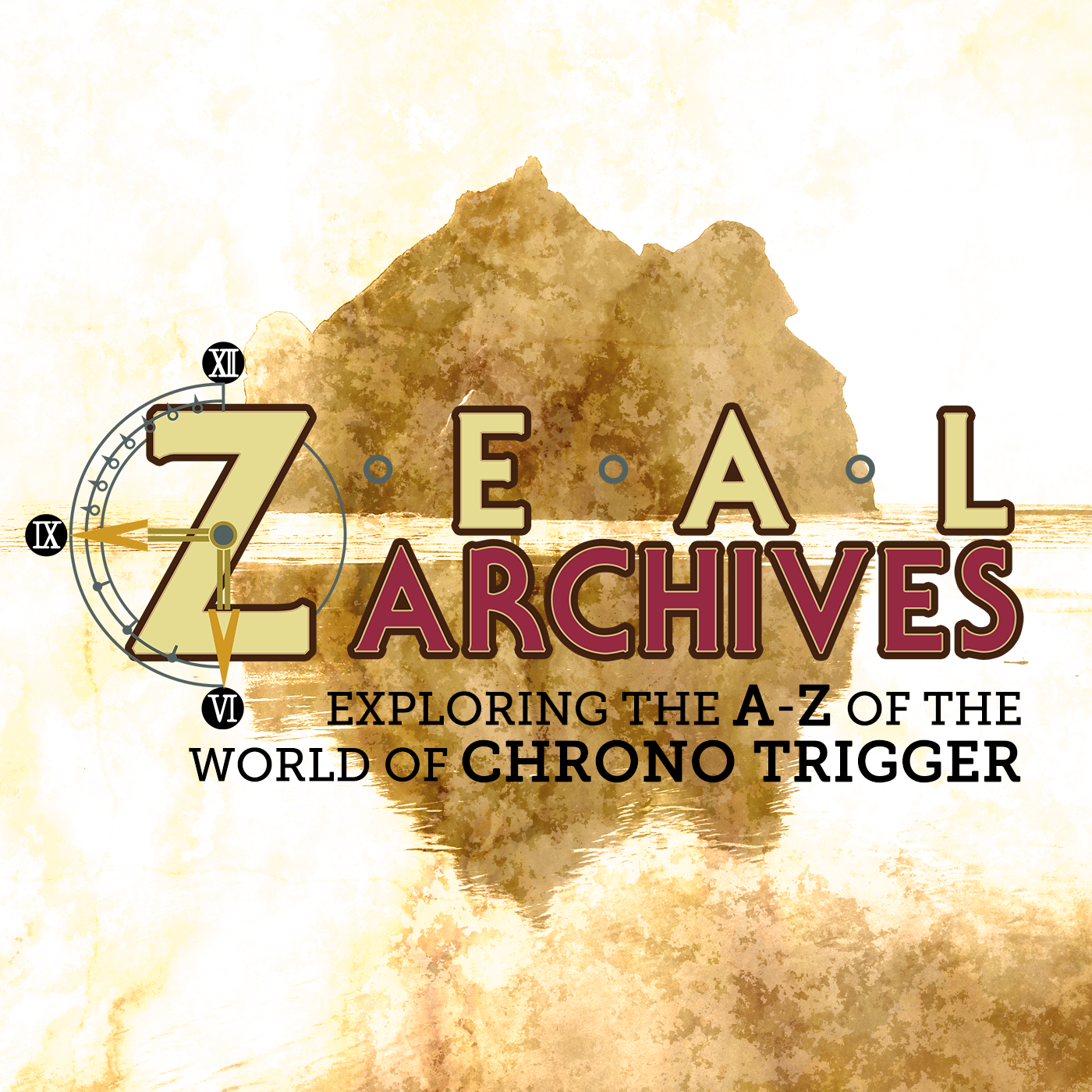 The Lineage of Guardia: A Family Spanning the Ages [Book 1, Chapter 3]

With renewed energy and a plan to open a gate home, the two are on a hunt for knowledge as they pore through volume after volume in search of any hint as to how. Gaspar’s organizational system is less than chronological, and the two end up learning of his plans for world domination… and of the lasting legacy of another royal family, the Guardias. T and G discuss: * The long (and storied) lineage of the Guardias, from 65 000 000 B.C. to 2300 A.D., including a brief tangent about the lore of Chrono Cross. * The implications of time travel on familiar lineage, in particular, a discussion about how time travel works in the world of Chrono Trigger (but not in depth because holy crap that’s a whole episode on its own). * A comparison of the reign of the Guardia family to reigning governments, empires, and uninterrupted states in the world of… Earth (congratulations Ethiopia on almost 3000 years of uninterrupted statehood)! ## What is “the Race Against Time”? The Race Against Time is an annual charity livestreaming marathon run by [the Nickscast](https://thenickscast.com) where we get as many endings as possible in Chrono Trigger to raise money [for the Alzheimer Society of Canada](https://alzheimer.ca/)! This year’s event will be August 10 and 11th from noon until midnight each day. We hope to outdo all of our previous records and raise $1500 CAD. For more details on the event, you can check out the main website at [raceagainsttime.io](https://raceagainsttime.io), [our Twitch page](https://twitch.tv/theraceagainsttime) where we host the stream, or you can follow us on [Twitter](https://twitter.com/raceagainstio) or [Facebook](https://www.facebook.com/raceagainsttimeio) for news about guests, giveaways, and other special surprises! Heck, you can even [donate ...